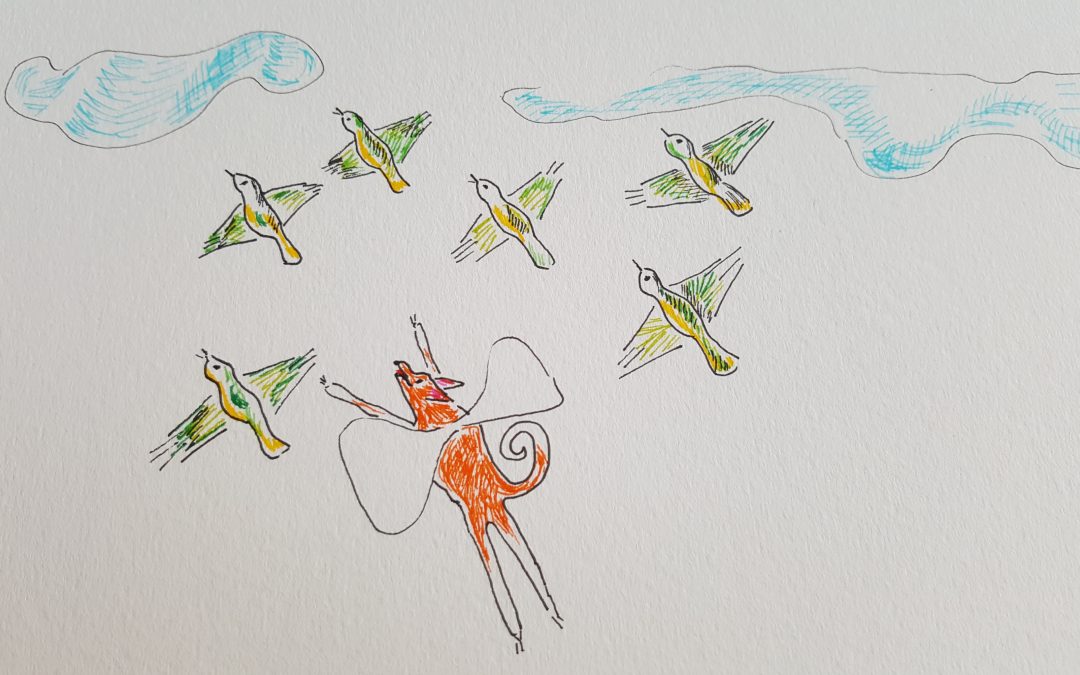 Everybody has its own paradise. Ours is the neighbourhood garden complex called Ons Buiten (Our Country Side) and the artificial lake De Nieuwe Meer. Lots of birds and city wildlife are to be encountered there. Like flocks of wagtails. These little yellow birds flutter around you making high-pitched jeet-jeets when flowing up in the air. At first I wondered who are these little yellow fairies, light feathered and furiously fast? My podenco (a Portuguese whippet) watches them fly away eagerly as if wanting to join them in their joyful flight.
Then a fellow-gardener told me: Those are little yellow wagtail birds! I looked them up through google and yes the man was right. The Motacilla flava breeding resides in Western Europe. Described as a slender 15 cm long bird, with a characteristic long and constantly wagging tail. They live on insects so the waterside is a perfect spot for them to be. Lucky us! The name Motacilla comes from ‘motare’ to move about and the cilla stands for tail deriving from medieval times. So the bird species is quite ancient too. Further information says that the yellow wagtail was considered a representation of Atum, the God of gods in Egyptian culture. And on top of it all, it is speculated upon that the wagtail has been the first inspiration for the Bennu Bird. The Bennu Bird was a self-created mythical being which in turn inspired the Greeks to create their phoenix.

What a contrast to the other birds invading our paradise: the parakeets of Amsterdam. Noisily they stream into our Vondelpark and gardens with herds of hundreds. Green and exotic, they let themselves be seen and heard! In the 1960’s some of them escaped out of their cages and established a population of thousands. Originally they seemed to have been brought into Europe by Alexander de Grote or by the Dutch VOC, bringing them along from their trade missions in the East.
The parakeets have designed an ingenious masterplan for their daily routine. When the sun rises little groups of them move successively to the main parks spread over the city to have breakfast and dinner, while in the evening all thousands of them meet up again in one location in the north of Amsterdam to safely and collectively spend the night.

One very special parakeet can be found at the Stedelijk Museum of Amsterdam though. The one made by Matisse in his famous, monumental work La perruche et la sirène. The work is in fact a collage of organically shaped forms cut out of coloured paper. The artist started to work in this manner from 1940 onwards and about this specific work he says “it is like a little garden surrounding me and in which I can go for a walk.”
Thus art and nature are always just one step away!

© The detail sketch picture images my little rescue podenco Sindy and is made by me.

* This story accompanies my knitwear design ‘Wagtails and one Parakeet‘